This week I spent in the digital media labs at uni rendering all the After Effects projects I’d done for 1812.  It didn’t take too long really and, now, after four days, I’ve finished it all, edited it together using Final Cut Pro, made a few tweaks and designed the DVD menus.  I’m just waiting now for the file to be compressed to go on the DVD I need to hand in and I’ll be finished, pretty much, but for the paperwork.

In the end, I’m very happy.  I think it could go a lot quicker, especially in the first third of the animation, but it would mean a lot more content which I don’t have.  However, I’m still happy and I think it gives the viewer more of a chance to listen and reflect on the music.  I’m very happy with the way the cuts go with the music and also the style of it, having the old film and a slightly desaturated look to the whole thing. 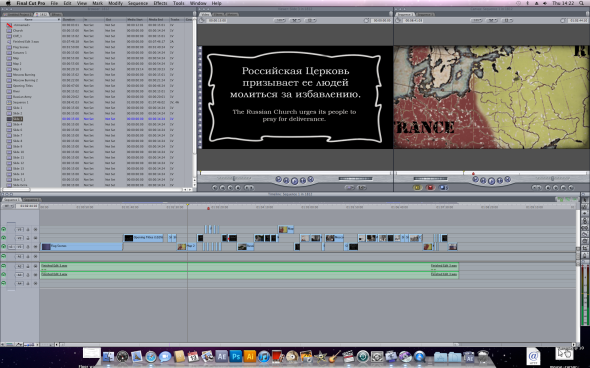 I have a scene in 1812, which is based on an engraving by Christian Johann Oldendorp, of Moscow as it burns when the Russians left it ablaze.  Of course there is smoke in this picture so I wanted some sort of animation to show that.  Scouring the internet for tips, I found that Particle Playground, a particle plug-in included with After Effects, is the best way around it.﻿

Using Particle playground, you can take away the gravity, causing particles to fly up, and play with the velocity and gravity force to change the speed and behaviour of the smoke (I still haven’t managed to get it slow enough for my liking…).  The colour and size of particles also helps make it look nice and finally stick a Fast Blur effect on to finish the job.  As you can see above, it look not too shabby and moves alright too.  Could be better but for an included plug-in, it works.

I wanted a cloudy sky to show the trouble which the Russians were in as Napoleon began to march towards Russia in order to invade.

Sebastian Sulinski has a great tutorial to make a really simple overcast cloudy sky using just two layers on Photoshop and then After Effects.  Using black/white for your colours, use the filter Render->Difference Clouds to get a nice cloudy looking layer.  By doing it again, the opposite way around colourwise, and sticking them into AE you can make a lovely overcast sky.  Just move the layers around, mess with the opacity and put a screen blend on the top layers and it looks quite effective.

Look out for the flag opening of the 1812 animation to see it in action; it will probably make an appearance again in all probability!

Great World Cup song over the summer by this name

but also what I’ve been creating using After Effects this week.

Starting with a jpeg of the flag made on Photoshop, making a layer for the flag and flag-pole.  This is imported to After Effects for the waving effect (which I learnt from a great tutorial I found online at creativecow.net) done with a technique called Displacement.

Now I tried, naiively, on my own to make a wave, using the Wave Warp effect but that was just shocking.  After a bit of research I found a neat effect called Fractal Noise which makes a solid layer move around a lot.  After some stretching, scaling, blurring and messing around with settings in the effect, you have a nice wavey look.  This layer can be placed on top of the flag layer and, using a blending mode (hard light) and an effect called Displacement Map on an adjustment layer above, causes the flag layer to ripple along like a flag in the wind.  Of course there are ways to mess around with the effect to get the desired result but you can see the tutorial above for that.  Anyway, this is what you end up with, which looks quite nice.

I finished my animation quite a while ago.  It took around 24 hours overall to just render out, let alone the time it took to put it all together.  I was pleased with it in the end, though, even if there was a spelling mistake and a dodgy lion wing, and I got 68% for it, making it almost a first class mark, which I was extremely happy with it!

So, here it is, enjoy and let me know what you think!

This is the opening to the animation I’m doing.  I’m currently rendering out all the scenes, most of which are taking hours to do, but this is all ready to go.  Enjoy.

In my Rev4 animatiion, this is another shot.  This goes with Revelation 1:12-18:

I have yet to add lighting (for the eyes. the stars and lampstands), textures and a background for outside the door and window but this is it basically. Also, I haven’t quite figured out how to do the double-edged sword, but I will do somehow! The camera will also be much nicer!